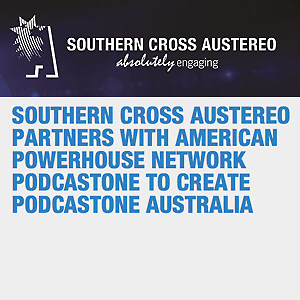 Southern Cross Austereo (SCA) and PodcastOne today announced they have signed a long-term partnership to create PodcastOne Australia, a brand and platform that will bring the best in podcasting directly to listeners.

SCA will operate PodcastOne Australia as the exclusive partner in Australia and New Zealand with select SCA podcasts made available in the U.S. on the PodcastOne platform.

As one of Australia’s leading media companies, SCA reaches 95% of the country with assets in television, radio and digital. PodcastOne is the largest advertiser-supported podcast network in the United States, delivering more than 200 programs, with over 350 hours of original weekly episodes, which were downloaded 1.5 billion times last year.

The joint venture represents the first international partnership of this magnitude in the commercial podcast industry with the companies together developing and producing content for both the U.S. and Australia.

PodcastOne Australia will be available early in 2017 via mobile app and website, providing listeners with a single, curated destination to easily get the best existing PodcastOne programs, along with the jointly-created lineup.

“I am thrilled that SCA has this opportunity to be partnering with PodcastOne. This partnership gives us the ability to tap into the expertise, experience and success of the leading commercial podcast company in the U.S. market, where the podcasting industry is a number of years ahead of audio, on-demand in Australia,” said Blackley. “We recognize the enormous growth potential of podcasting, both internationally and domestically, and look forward to further building this vast platform with the best international and unique Australian content. SCA is striving to be at the forefront of developing the Australian podcasting industry and its talent.”

“This is PodcastOne’s first partnership outside of the U.S. - really the first of its kind in the podcast industry all together - and Executive Chairman Norm Pattiz and I are very excited it is with Southern Cross Austereo, who leads the radio and audio industry in Australia,” said Berk. “SCA will now have a U.S. platform to actively promote the best commercial podcasts in Australia, giving creators and producers the opportunity to expand audience reach to new territories, and grow audience by being available on the PodcastOne app and website.”

Grant Tothill, currently Head of Strategic Partnerships at SCA, has been appointed to the newly created position of SCA Head of Podcasting to run the new business.

Further announcements about new Australian podcasts and the launch of the platform will be made in the coming months.